5 Most Famous Gifts in History!

Posted on1 Year ago
Love2

5 Most Famous Gifts in History!

Gift giving is one of the best and most efficient ways to show love and gratitude to our loved ones. Actually, many things can be done by presenting a nice and suitable gift. To charm and entice for the one you are in love with, to make peace to someone you had a fight with or even to win a battle with someone you are in war with!? If you want to send gifts to your friends or even your enemy, we suggest you to read this article and find out the most famous gifts in history! 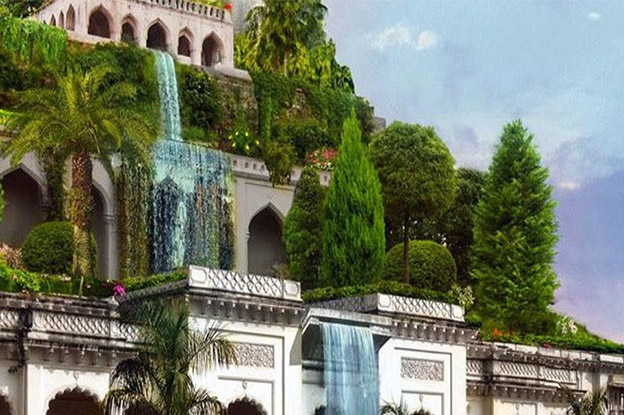 Sending beautiful and fragrant flowers to your loved ones is always one of the best gifts. But even the largest basket of flowers and bouquets has nothing to say against the gift of the Babylonian king to his wife. According to history, not so long ago (approximately 2600 years ago!) Nebuchadnezzar II, king of Babylon (Iraq), married Amitys, the Median princess of Persia, which was a marriage between two lands. Since Queen Amitys lived in a green and beautiful land with temperate weather and after getting married and entering Babylon, which, unlike her fatherland, was not pleasant and green, she fell ill and homesick, the king of Babylon decided to make his Queen Amitys happy. He built large halls and gardens with stepped form, full of his wife's favorite plants and flowers, in a way that the plants and trees appeared hanging and suspended. A masterpiece consisting of the art of building architecture, structural engineering and gardening, which is one of the Seven Wonders of the World. Although, unfortunately, there is no trace of this wonderful paradise today, and some have considered war or earthquake as the cause of its destruction, but the story of the gift of this kind husband will remain in history .

2- Trojan Horse, a friendly gift from a clever enemy!

We all know that by giving a gift, relationships can be made more intimate and we can express our love and devotion by offering a beautiful and efficient gift to the recipient. But have you ever given a gift to your enemy? A gift not for peace and ceasefire but for overcoming and destroying the enemy! A gift with a seductive and beautiful appearance outside but with a destructive and violent secrets inside! The Trojan horse is the strange and clever gift that destroyed the enemy. This gift was in fact a war trick by the Greeks to win the war against the land of Troy. This event took place in the Bronze Age. In the battle of the two lands, the Greeks, disappointed by the victory after the fruitless siege of Troy, built a huge wooden statue in the shape of a horse to hide the skilled warriors inside and left it behind as a souvenir and gift in the land of Troy. They had apparently found no other way to enter the stronghold of this city so they pretended deserting the war and sailed away. After the statue was brought to the city by the people of Troy, Greek warriors came out and started fighting and in the end the Greeks won this war. A gift that ultimately led to the failure of the recipient!! 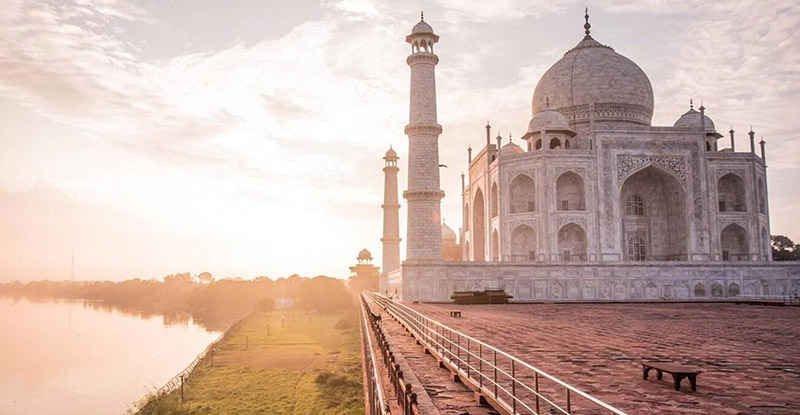 3- Taj Mahal, in memory of the deceased!

Taj Mahal, one of the most famous monuments in the world, is a beautiful and majestic tomb located near the city of Agra, south of the India capital Delhi. According to historical legends, this monument was built by order of Shah Jahan, the fifth Mughal emperor as a gift and a memorial to his Iranian wife named Arjmand Banoo or Mumtaz Mahal. She died during a war trip while giving birth to her fourteenth child, Goharara Beigum. Also the King Shah Jahan himself was buried in this place after his death. This building is a combination of Iranian architecture and Mughal architecture, in the construction of which 20,000 artists participated under the supervision of great architect Ustad Ahmad Lahori. The height of this building is 73 meters. The most beautiful feature of the Taj Mahal is its marble dome at the top of the tomb. This shape of the dome is known as the onion dome. Four umbrella structures in the form of smaller domes are located around the main dome, which has added to its beauty. This magnificent building is made of white marble and gold, inlay and Khatam are used in the interior decoration of the building and also diamonds are used to decorate the tomb of the king's wife. . 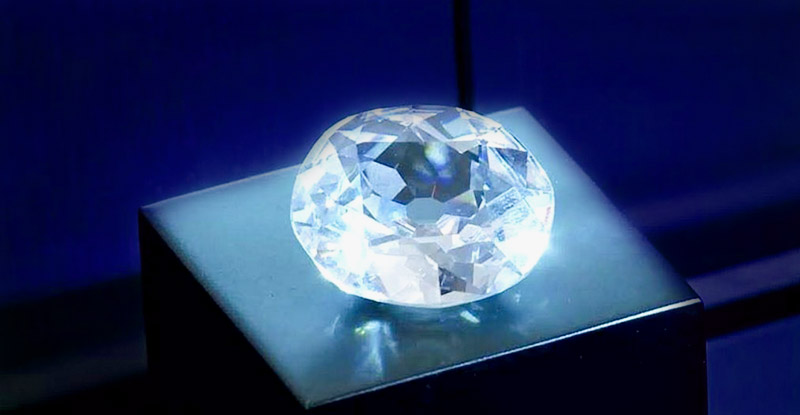 The Koh-i-Noor diamond is one of the largest diamonds in the world, which was reportedly found under a dry riverbed in India in 1656. This diamond was originally 793 carats when uncut which makes it the largest diamond in the world. The diamond was presented to Shah Jahan, King of Mughal, India, after it was discovered by Mirza Mohammad Mirjomleh, the famous Iranian minister of Abdullah Qutb Shah. Nader Shah, King of Iran in 1739, after the conquest of India, took this diamond, the Daryaye Noor Diamond and the Great Mogul Diamond as war trophy from India. The name of Kuh-e Noor is actually the name that Nader Shah uttered when he saw this diamond on the crown of the Indian Sultan. The diamond reached Afghanistan after the death of Nader Shah by Ahmad Shah Durrani. Then this diamond was owned by Shah Shujah Durrani. Kuh-i-Noor diamond was returned to India after Shah Shujah Durrani was defeated by Sher-e-Punjab. The other two diamonds taken as war trophy by Nader Shah have a different fate. The Daryaye Noor diamond is now in National Jewelry Treasury of Iran that is housed within the Central Bank of the Islamic Republic of Iran, and the Great Mogul Diamond is part of Catherine the Great's imperial Russian scepter in the Kremlin, Moscow. The Kuh-e-Noor diamond was handed over to the British East India Company during the colonial period after a treaty between the Indians and the British. The company presented the diamond to Queen Victoria and this diamond eventually became the main part of crown jewel of the Queen of England and is a member of the Royal Jewelry Collection of England now. . 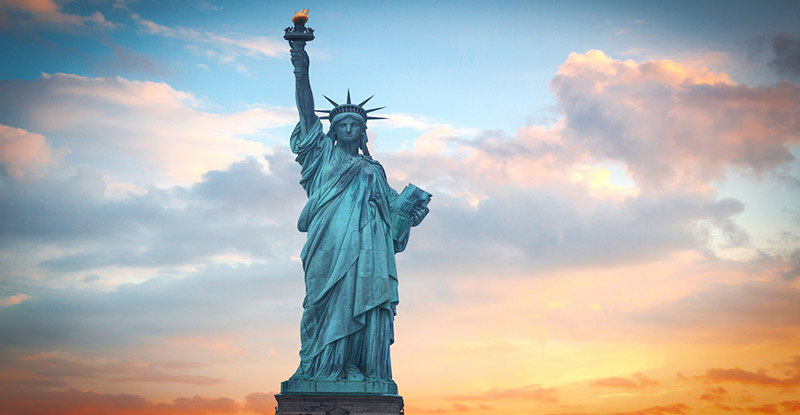 5- Statue of Liberty, an incredible gift for friends abroad!

We all want the gift we send to our friends and loved ones to be very beautiful, big and impressive. So that the memory of this great and beautiful gift will be immortalized in the recipient's mind forever. If you are looking to send an impressive gift in an almost large size, we suggest you to send a 93-meter-high statue! Can't you?! Oops! Looks like a Nation did this before you! The idea for this massive gift was presented in 1865 by the French politician Edouard René Lefebvre de Labola. He believed that France should do something in honor of the United States after the end of the civil war. So he came up with the idea of making this statue. This large statue was presented by the French to the United States in 1886 as a gift and a symbol of friendship between the two nations on the occasion of the 100th anniversary of American independence from Britain. The 46-meter-high Statue of Liberty was built by French architect Frédéric Auguste Bartholdi and began in 1875 under the supervision of Alexandre Gustave Eiffel and ended in 1884. This beautiful gift was sent to the United States in 350 separate pieces and was built on Liberty Island in New York Harbor to be a symbol of America and to welcome travelers coming to New York by sea. The Statue of Liberty has a torch in her right hand and a plaque with the words " JULY IV MDCCLXXVI" in her left, which is the date of American independence (July 4, 1776). One of the legs of the Statue of Liberty rests on a chain, and the seven ridges or radius on the crown of the statue, symbolize the seven seas or seven continents of the world. Historians believe that the statue was taken from Libertas, the goddess of Roman liberation. However it is said that, the creator of this gift, Frédéric Auguste Bartholdi, was inspired by the huge statues of angels protecting the tombs of Nubia in southern Egypt for creating this statue. An amazing and also very huge memento for friends in abroad!

These gifts are unique, huge, beautiful, extraordinary and very pleasant (except one! The Horse!) And also they became very memorable in history. It is true that your gift cannot compete with them. They are not even in a same league, but all of them have one purpose and same meaning (except one! The Horse!). And that meaning and purpose is L.O.V.E! Just like the gifts you give to your loved ones!

It is true that you cannot give a gift to your loved ones like the hanging gardens of Babylon, but by sending a beautiful flower box full of red roses, you can create a lot of joy for them. Giving a big and shiny diamond to your beloved may be an unattainable dream, but by offering a beautiful necklace as a gift on a special day, you will create a lovely memory for your sweetheart. Sending a large statue like the Statue of Liberty to express friendship and love to a dear friend you haven’t seen for a long time, is impossible and actually impractical, but by sending a statue almost 333 times smaller than the Statue of Liberty, you can make an interesting and memorable memory for that dear friend.